The word Banjara is a deprecated, colloquial form of the word of Sanskrit origin. The sanskit bi-word Vana chara transliterated as "Forest wanderers", presumably because of their primitive role in the Indian society as forest wood collectors and distributors.
The Banjara are a class of usually ascribed as nomadic people from the Indian state of Rajasthan, North-West Gujarat, and Western Madhya Pradesh and Eastern Sindh province of pre-independence Pakistan. They claim to belong to the clan of Agnivanshi Rajputs, and are also known as Banjari, Pindari, Bangala, Banjori, Banjuri, Brinjari, Lamani, Lamadi, Lambani, Labhani, Lambara, Lavani, Lemadi, Lumadale, Labhani Muka, Goola, Gurmarti, Gormati, Kora, Sugali, Sukali, Tanda, Vanjari, Vanzara,and Wanji Together with the Domba, they are sometimes called the "Gypsies of India".

The Banjara have spread to Andhra Pradesh, Haryana, Karnataka, Maharashtra, Madhya Pradesh, Rajasthan, Uttar Pradesh and other states of India. About half their number speak Lambadi, one of the Rajasthani dialects, while others are native speakers of Hindi, Telugu and other languages dominant in their respective areas of settlement. Rathore, Parmar, Pawar, Chauhan, castes belong to Vanjara community in Rajasthan and Gujarat now are in General Seats after the communal rights taken place in Rajasthan for Reservation in 2008 as they were landlords in Amarkot, Fathaykot and Sialkot before Partition of India and Pakistan. They are an ST in Andhra Pradesh (where they are listed as Sugali), Orissa, Karnataka (SC), Haryana, Punjab, and Himachal Pradesh.


The traditional food of Lambadis is Bati which is Roti. Daliya is a dish cooked using many cereal (wheat, jawar). Banjara people are very much fascinated about non-vegetarian food. Saloi (made from goat blood and other parts of goat) is a non-vegetarian dish made exclusively by Banjara people. They prefer eating spicy food.

Women are known to wear colorful and beautiful costumes like phetiya (as ghagra) and kanchalli (as top) and have tattoos on their hands. The dress is considered fancy and attractive by Western cultures. They use mirror chips and often coins to decorate it. Women put on thick bangles on their arms (patli). Their ornaments are made up of silver rings, coins, chain and hair pleats are tied together at the end by chotla.
Men wear Dhoti and Kurta (short with many folds). These clothes were designed specially for the protection from harsh climate in deserts and to distinguish them from others.

Their customs, language and dress indicate they originated from Rajasthan. They live in settlements called thandas. They lived in zupada (hut). Now many of them live in cities. They have a unique culture and dance form. On many occasions they gather, sing and dance.
Their traditional occupation is agriculture and trade. Banjaras are also a group of nomadic cattle herders.
The accurate history of Lambanis or Lambadis or Banjaras is not known but the general opinion among them is that they fought for Prithvi Raj against Muhammad of Ghor. The trail of the Lambadi/Banjara can be verified from their language, Lambadi borrows words from Rajasthani, Gujarati, Marathi and the local language of the area they belong to.
Banjaras originally belong to Rajasthan and they were Rajputs who migrated to southern parts of India for trade and agriculture. They settled down in the southern or central area of the country and slowly loosened contacts with Rajasthan, and their original community. Over a period of time both the communities separated and they adopted the local culture. The language spoken by Banjaras settled in Yavatmal district of Vidarbha, Maharashtra is an admixture of Hindi, Rajasthani and Marathi. The word "Banjara" must have evolved from Prakrit and Hindi and Rajasthani words "Bana/Ban or Vana/Van" meaning Forest or Moorlands and "Chara" meaning 'Movers'. The Banjara are (together with the Domba) sometimes called the "Gypsies of India".
Lambadi Dance is a special kind of dance of Andhra Pradesh. In this form of dance, mainly the female dancers dance in tune with the male drummers to offer homage to their Lord for a good harvest. At Anupu village near Nagarjunakonda, Lambadi dance originated. They are actually semi-nomadic tribes who are gradually moving towards civilization. This dance is mainly restricted among the females and rarely the males participate in Lambadi dance. Lambadi is a special kind of Folk Dance which involves participation by tribal women who bedeck themselves in colorful costumes and jewelry. 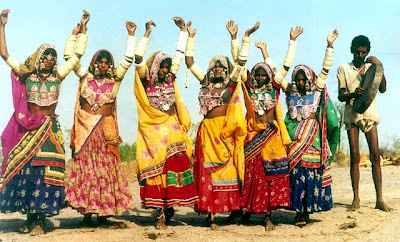 The banjaras are grouped into 4 categories called gotras. The lambadi language term for gotra is Goth/Pada. The gotras are
1. Rathod/Bhukya
2.Chavan
3.Pawar
4.Vadtya.
Under each of these gotras there are several Jaaths. People falling in the same Gotra Dont marry, they are considered brother and sister. The term for this is Bhaipana meaning brotherhood. If people fall under different gothras and can marry, the term used is Laagach means can marry. People usually have their jaath name as the surname, A detailed Jaath check of which jaath can marry which jaath and whom they fall under can be done at banjarapoint website in their jaath check / gotras check page. This was traditionally done by people called dhadi bhaats who were kind of knowledge agents/Knowledge experts.
The Rahtod/Bhukya Gotra/category has been said to have split into 2 making Banoth as a separate gotra by itself. So some people say there are 5 gotras.Turi(badawat)is also said to be an additional gotra.it means there are 6 gotras can be said